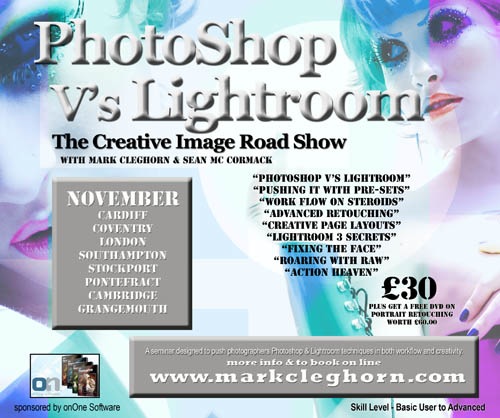 Hey folks, it’s time for the big post. After a night in my own bed again, I’m ready to tackle the world. As you might know from my last 2 posts, I’ve been all over the UK teaching Lightroom. And while it was hard work, it was also a lot of fun, with a lot of hotels and restaurants to boot.

I flew into Glasgow, where I was picked up by Mark Cleghorn and his son Carl (hey guys!). They’d just driven from Cardiff, and the timing was perfect as they were just arriving as I landed. We went straight for food and the hotel. This started the early nights and early mornings for me. I’m usually living on US time! Up at 6:30am for 7 breakfast and onto Loxley Colour for the first date of tour. As this first date wasn’t in a hotel, we had to go shopping to provide a packed lunch option for the attendees. Fun getting 20 hot bagettes straight out of the oven!

We set up all our AV equipment and sat down to do a final practice on our shared material for the first hour. The first date can have kinks, but I felt it went well. To explain the run of all the talks: We talked about similarities between Camera Raw and Lightroom, along with when to use Photoshop. I then jumped into Lightroom’s design and layout, as well as giving shortcuts for more effective workflow. Mark introduced Bridge and ACR showing a few ways to make selections in Bridge, and doing quick fixes in ACR. I countered with selection methods in Lightroom, expanding from ratings and labels to flagging and quick collections. Mark then did some edits, I did white balance and Camera Raw Cache, finishing up with showing how find missing files and folders, and how to get User Sort working.

After a short break, Andy from onOne software did demos of MaskPro, Focal Point and showed the new Perfect Layers demo. I’ll go into the more in another post. I was well impressed with the Perfect Layers concept.

The rest of the seminar was split between us. Mark did a lot of retouching, and then before lunch I introduced the new Lightroom 3 Import, and covered Tether, Noise Reduction, Lens Correction, Cropping, Profiles, Process Version, Vignette, Sepia/Warm/Cool/Cross Process via Split Tone, Point Curves, Tilt Shift, Timelapse and Video import, along with creating and using Presets.

After lunch Andy did a 2nd demo. It did vary, but often included Photo Frame and Genuine Fractals. I was next up, and did a workflow that expanded on from where I was in the morning. With Import and Selections already covered, I went into develop, showing how to balance a photo via the Basic panel. I showed some retouching, with soften skin, blemish removal and fixing catchlights. I did add dodging and burning at the end of the tour to show how you can shape the face without liquify. From there I went to the 5 ways of getting stuff out. For Export, I showed getting stuff into your email client, along with Watermarking. I covered creating Slideshows, video/pdf/jpeg export, along with adding music. For Print, I covered Contact Sheets and Picture Package quickly, and concentrated on making layouts with Custom Package. I also showed how to set up for colour managed printing. For Web, I introduced the default galleries, then showed off LRB Portfolio and LRB Exhibition. For those interested in online proofing, I showed TTG Highslide Pro. Finally I showed Publish to show putting photos on Dropbox and where there was an internet connection, I showed publish to Flickr, along with comment tracking.

For the final session, Mark showed tonnes of Photoshop including Liquify and a really cool trick using Mini Bridge and fixed sized files to auto crop images for album layout. I had to do a double take the first time I saw it. As the tour went on, he found a way to make it even quicker.

Now that the run of the day is covered, I’ll go back to the individual days and various bits about them. I should mention that Carl was the tour manager and ran the desk. While we weren’t there to push Phototraining4U, we did want signups too. (Honestly folks, with over 600 films online from Photoshop to photo business, it’s really worth it, especially with at least 6 new films each week). Mark also donated the proceeds from one of his books to Children in Need (we raised £500 over the whole tour). Only a few donated to my Movember efforts though.

Being the first day, I had a moment halfway through my first solo seminar, where I got suddenly nervous. I almost laughed out loud when I noticed. That might sound odd, but I’ve spoken publicly loads of times, and without being modest, I do know Lightroom really well, so there was no need for nerves. Funny. I think I even said it out loud..’Get it together, Sean!’.

On lunch, delegates were given a tour of the factory floor. I wanted to go, but was flagging from a lack of sleep the night before, so didn’t, despite how much I actually wanted to go. Instead, I got a personal tour of the factory later on during Mark’s afternoon session. If you’ve never been, Loxely Colour make albums, prints, frames, acrylic/metal mounts, even film processing. It’s huge! I was very impressed with the setup. Mark has been using them for years and I can see why. Fantastic place and products. I even got to see the server room from where they run the ROES that powers their customer upload. So much technology in one room makes it a geek photographers paradise.

As the day ended, we packed up all the gear and drove to Stockport for our second location and hotel of the trip. I think we ate in the associated pub that night, but I’ll be sure to recount tales of food woe and wonder in part two!