Because Lightroom use a percentage scale rather than the older 0-255 scale, a lot of people ask for such a scale to be added to Lightroom.
While in theory it seems like you just convert the numbers and you’re done, it’s actually not that simple.
The 0-255 scale is a measure that comes from 8 bit files. There are only 256 levels in each of the channels, so such a number can accurately describe any 8 bit colour. 16 bit colour has 65536 levels per channel. Thats a huge jump in the number of colours and a larger margin of error is we use a 0-255 scale. In truth Raw files are 12 or 14 bit, and a 12 bit file would have 4096 levels of colour per channel. Even that is an unwieldy level to use.

Lightroom founding Engineer Mark Hamburg choose to use a 0.0 to 100.0 percentage scale, which with 0.1 accuracy gives use 1000 levels of colour. Finer than 0-255, but still not in the order of 12 bits per channel colour.
The other issue with a 0-255 scale in Lightroom, is that even if you had one, it is only accurate for the Lightroom working space. To use the words of Jeff Schewe: Admittedly, since Lightroom uses an unusual color space internally (ProPhoto RGB Chromaticities and a linear gamma for processing, but an sRGB gamma tone curve for histogram display), there are no traditional color readouts to be had. Insiders call the Lightroom color space Melissa RGB, named for one of the Lightroom team members. (We like it because as far as we know, it’s the first color space named for a woman.) So this would be completely inaccurate if you were exporting to any other space. Still people would ask for such a thing.

One possible compromise would be to have an option to see the values as if it were exported to an 8bit sRGB space. I’m not optimistic that such a thing would be possible, and to be honest, we do need to start thinking in more accurate colours. Anyhow, here’s a rough conversion guide for % in RGB numbers. Bear in mind that when you export, these will be subject to the rendering of the conversion engine in Lightroom, and so will be different on export. Try it and see the difference. 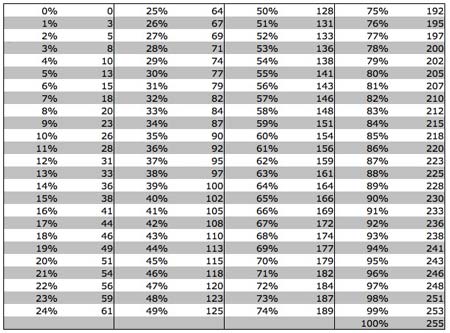 Rough conversion between % and RGB255 numbers

Update Jao Van De Lagemaat has posted a link to his blog on the comments with conversion number for the MacBeth colourchecker chart.

Using the Keyboard in Basic

A finishing touch? Photoblogging with Lightroom