A recent near miss with serious data loss has me rethinking my current import by genre strategy. In a fairly recent post on Lightroom Forums.net, John Beardsworth argues for always importing by date and using metadata to create any other required structure. The background to this post by him is that I was touting a structure like Landscapes>Ireland>Connemara>Bunowen, rather than by date.

“Unless you use a strictly date-based structure, there is always the risk of your pictures either being duplicated or falling between the cracks and being controlled only in your imagination. Where, in Sean’s example, would one put a shot that fits more than one category – a portrait in a bleak Connemara landscape. In bands, or in Connemara? Why not in both? Or should it depend on the size of the person relative to the landscape. A second set of considerations is reconstruction – imagine a catastrophic system failure and what makes rebuilding easier. A subject hierarchy or simple date based folders? In other words, using your folder system to analyze your work is a dead end – that’s what metadata is for.”

My issue began when doing some backup. Somehow the power supplies of my archive drive and the backup drive became swapped and both drives crapped out (the somehow being my own stupidity, I suspect). I surmised that perhaps the 12v and 5v lines were swapped in each (they have identical connectors) and that by swapping the drives and the caddies, I might get one working. I was right and managed to avoid serous data loss through this. Needless to say I bought a new drive immediately and backed up the photos.
Now I did have most of the stuff on DVD also, but newer stuff wasn’t there because my DVD backups were monthly at the very least. Since I changed to using 2 drives for backup, I’ve been lazy about using this procedure. Also the Genre method makes it hard to save monthly. I’m back to importing by date now, but with one change.

I want to have my shoots in their own folder. Sometimes I might have 3 or 4 unrelated items in one day, eg portraits during the day, band promo shoot in the evening and a live gig at night. I don’t want these together in one folder, so here’s where a simple bit of typing can help.

Currently Lightroom only allows one set of metadata/keywords/settings at a time on Import. Because of this I tend to do multiple imports from one card if need be. So to decide my import location I now choose the 2005/December/17 style date import as per Fig 1. (I could also use 2007/12/07, but I like seeing the month name.) 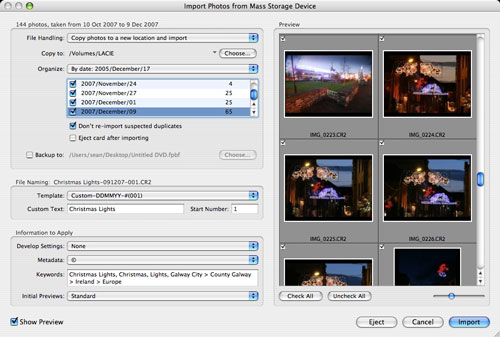 I then double click on the folder name that is being applied to edit it. I leave the date string intact as 2007/December/09, but I add to with a /Lights. The leading “/” forces Lightroom to create a new subfolder in the date folder. You can see the full string in Fig 2. 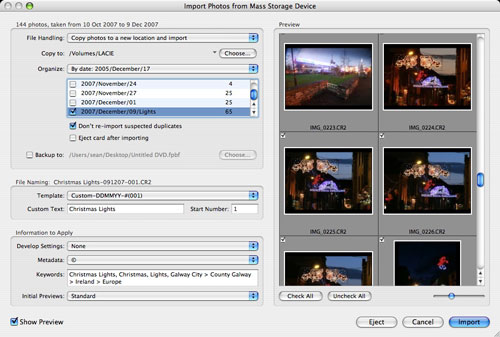 With 2 shoots from that date imported in the same way, I have the shoots in individual, but date based folders.

Of course now I need to consider how to get my older folders into this order. I have a few options: Use dates from the Metadata Browser to manually create dates and move the subfolders to these. I could simply save out all the Metadata and remove the files and reimport by date. I’d lose Virtual Copies and Collections this way though. Any option I choose forces compromise, so this will dictate the choice. As an interim option I could also simply make a date/month/subfolder option for now and add the date as time allows. I suspect the latter choice will be the easiest, with least loses.

And now John will get a chance to say ‘I told you so’.